“Erin did my maternity pictures and then my twins newborn pictures. She was a dream to work with, so sweet and great with my 5 year old. She was a great communicator and let me ask all the questions I needed to about upcoming sessions. I felt so comfortable with her posing and holding my two newborns. The pictures I received from her I will cherish forever, and she managed to capture everyone looking good which is not an easy task. I recommend her to everyone, SHE IS AMAZING ❤️” 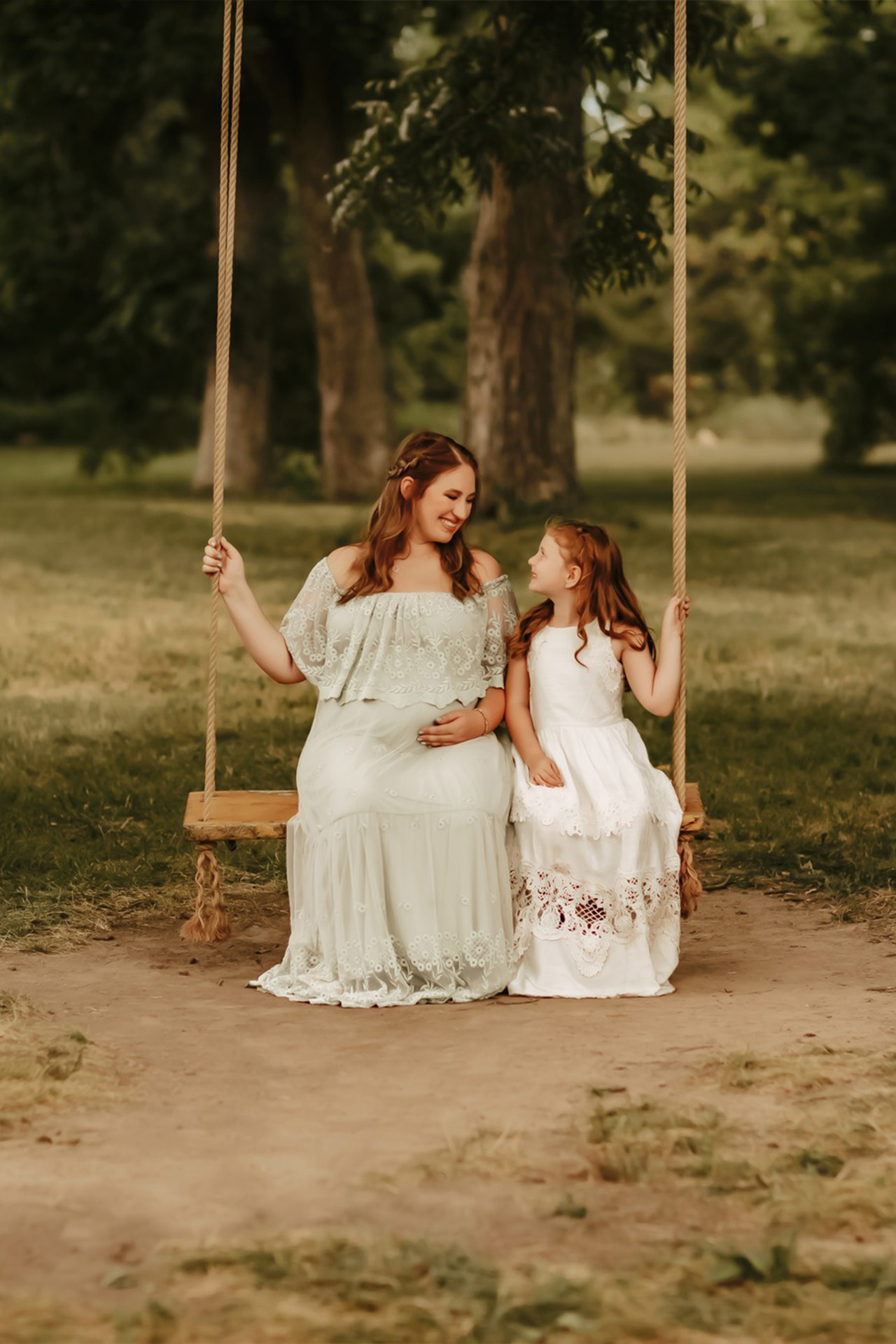 Chelsea came to me for a family session with her husband and their 5-year-old daughter and newborn twins. The most important picture she wanted to capture? A photo of Chelsea and her oldest daughter, because they didn’t have many photos together.

We chose an outdoor location at Coal Creek Farm in Jenks, a beautiful area that has boatloads of fantastic spaces for pictures. We did a fence line picture, a tall grass picture, pictures with the blooming zinnias, creek pictures, and pictures on the swing.

For the newborn twin part of the session, we headed into the studio. We started with a lifestyle pose of the twins, followed up with getting the oldest daughter in with her siblings. Then we had all five of them in a family photo together, plus individual photos of the twins.

It was important to get the sibling pictures done quickly, as kids under 10 lose interest very fast during photo sessions. One day they will have separate rooms and will want their own photos – I like to give families options without being overwhelming.

The love this family brought to the session was palpable. They were very caring and genuine, going with the flow. It was a wonderful experience with some truly lovely photos to come out of it.

And Chelsea was thrilled with the photos we got of her and her daughter – the most important ones.

“Erin is the best ever!! She is fun and makes sure everyone has a good time during sessions. We’ve had three sessions with her now. She did so good with my newborn photos and made all my maternity picture dreams come true! (She will move… or at least climb… mountains to get you what you want!)”

Kylie came to me for a maternity/newborn combo session – that is, she did a maternity session while she was pregnant, and then I came back a few months after the baby was born to take newborn photos.

But Kylie didn’t want just any maternity session – she wanted to climb a mountain! A friend of hers had climbed the Gloss Mountains while pregnant, and she wanted to do it, too. So I said, “Let’s do it!”

Fortunately, there were stairs up the mountain except the last 20 feet, so climbing it was easier than it sounded.

We went to the Gloss Mountains in late summer, while she was due in September. We did a session with two different dresses, a pink one at the bottom of the mountain, and a white dress at the top. The top of the mountain was very windy, which helped the dress flow.

Her husband came to the session, although he didn’t want to be in the pictures initially. We did take a few with him, and ultimately, they chose several pictures with her husband in them.

For the newborn photos, I traveled to her home. The baby had difficulties getting to sleep for the session – babies generally pose better when they’re asleep – but we managed to get a lot of lovely photos of their newborn and the two of them.

It was their first child, and I’m honored to have been the one to document this very special chapter in their life. 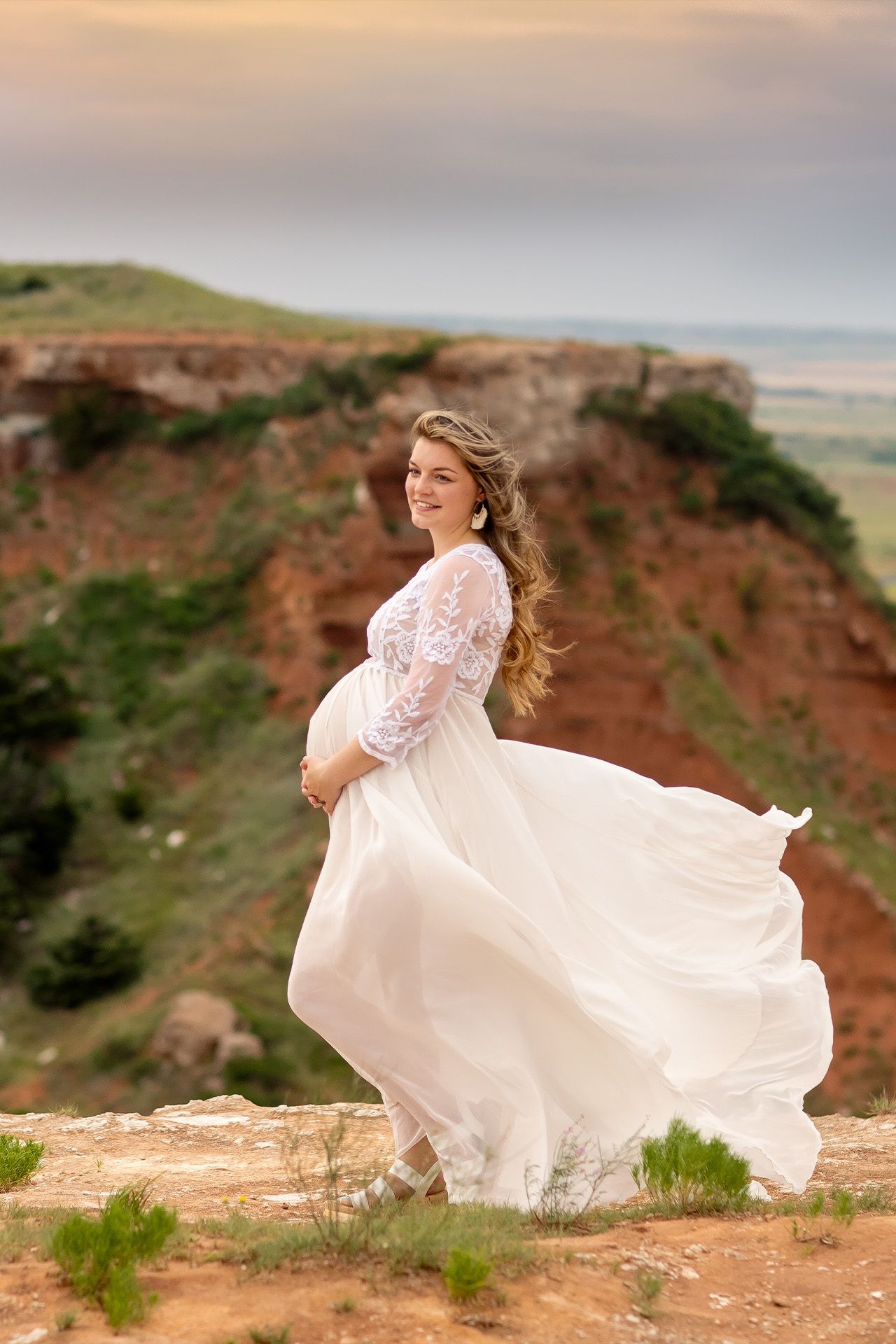 “This year, we trusted Erin Kaye Photography for our annual family photo shoot and are ecstatic with how our photos turned out and the experience working with her. I can’t even explain how wonderful the pictures are, we were blown away by the quality! She worked very well with my 4 year old and was able to get the most adorable photos of him because of it. Erin is a very talented photographer and I highly recommend her to anyone else looking for a professional, highly organized, sweet, and fun family photographer.” 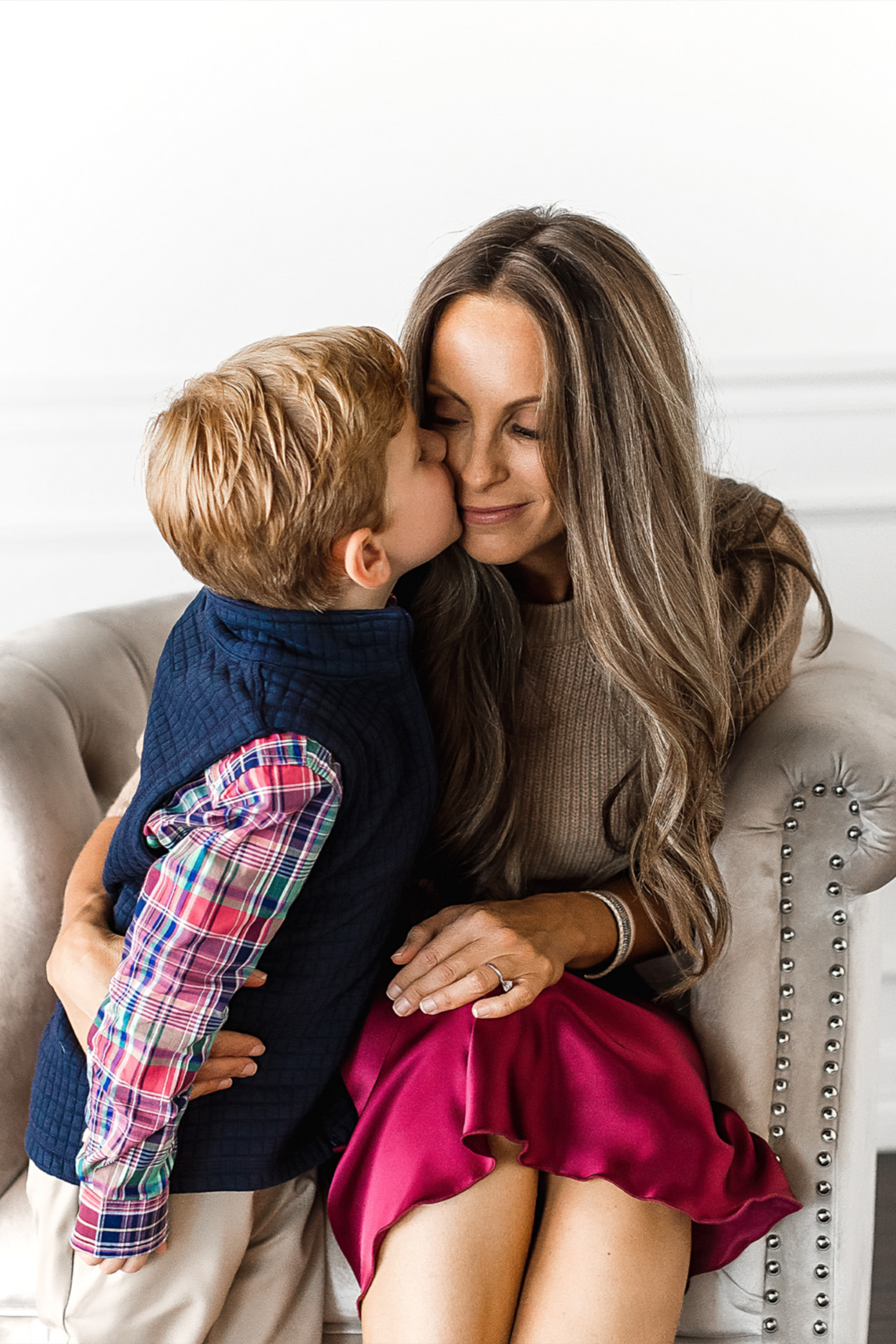 Tiffany is a real estate agent who wanted family photos for her business, so we booked a 30-minute session with Tiffany, her husband, and their 4-year-old son – a total goofball who was a delight to photograph!

She wanted a classy look, so we chose a studio instead of an outdoor location for the session. It keeps the pictures cleaner, with a more simple background, and it’s easier to focus on the family.

We started out with the family together on a classy velvet couch, and then took one adult out at a time to get mom & kid, and then dad & kid pictures. Then we let their son take a break to do a few photos of just the parents.

Finally, we wrapped everything up with a handful of individual photos – again, starting with their son first and then moving on to the adults.

It was a great session that garnered her some terrific photos for her real estate business.

“We have used Erin Kaye Photography five times now to capture some very special memories for our family. Each time she delivers the absolute best quality, with minimal wait time! We look forward to using Erin year after year!”

“Erin took our family pictures in the fall and did an outstanding job. We were so pleased. She also just took our fourth baby’s newborn pictures and we are so in love with the moments she captured in just a few short hours. She is a pleasure to work with and great with kids.”

“We love Erin Kaye Photography! She is always so patient with my family of SIX and is able to capture the most precious moments of us all! We’ve used her for the last two years and will continue to trust her for our family pictures!”

“Erin is super laid back and fun! She was the perfect choice for our family pictures. We love her and her pictures and will use her every year!”

“Erin is amazing. She has such an eye for photography and is so good with kids. She notices the little things that most of us would never see, but ends up creating the perfect picture.”

“Working with Erin was a BLAST! So much so that I forgot we were even doing a photo shoot. She handled my busybody 19-month-old like a champ. We love you, Erin!!”